This past Wednesday I had the honor of speaking on mobile volunteerism at Mobile Tech Training during Net Change Week in Toronto.

In my talk I shared some examples how mobiles are aiding traditional volunteerism, are allowing new forms of micro-volunteerism as well as a few interesting ways devices are being used to indirectly volunteer for a cause.

We are entering an incredibly exciting time. One, we are experiencing massive cell phone adoption unlike we’ve ever seen before. Two, these devices are becoming increasingly powerful. Three, there is a movement of people wanting to help make a difference. Mobile devices are and can play a crucial role in volunteerism.

There is a large number of devices, with a wide range of functionality.

But it’s not the individual features that’s interesting, but rather how you can combine these features together. The mobile device is the ideal platform for engagement, providing realtime collaboration on the go.

So how are mobiles being used now to help aid traditional volunteerism?

One great example is VolunteerMatch, which helps you find volunteer opportunities nearby. In March, they launched an iPhone application to extend their platform allowing users to easily find opportunities closest to where they live, work and go to school. They utilize the location-detection and mapping capabilities of the iPhone to make it even easier to discover one of the 75,549 volunteer opportunities. You can also get recommendations from other volunteers and share your activity with friends on Facebook or Twitter. 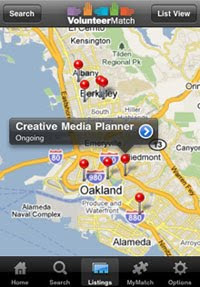 The president of VolunteerMatch Greg Baldwin said, “The social and mobile era is here, and new audiences will be engaged and inspired to volunteer without ever opening up a traditional Web browser. We’re excited to help nonprofits more effectively use these tools to get the support they need.”

Idea: Mobile developers out there, there’s an opportunity to provide similar functionality for Canadian content.

Another interesting example is the Florida-based niceSERVE, who organize a faith-based event that mobilizes people to serve locally. This event connects volunteers and local non-profits by creating helpful service projects that are geared toward revitalizing communities. Here’s a video explaining how niceSERVE works.

Brilliant idea, give people first hand experience helping a nonprofit, while reducing the barrier of entry. Their event happens three times a year, allowing members of the community to give back, and as a result helps build lasting relationships. The niceSERVE iPhone app helps make sign-up even easier. One, select a location. Two, select a category. Three, select a project. 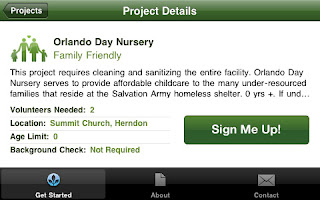 The niceSERVE mobile app does a great job to help aid the signup process, but what if their application also allowed:

Huge potential for their mobile app to engage volunteers at and following the event.

Idea: Could Volunteer Canada adopt a similar nation-wide strategy for their volunteer week?

So VolunteerMatch and niceSERVE are good examples of using mobile devices to help aid people in discovering volunteer opportunities nearby. However, they only utilize a few of the powerful features the mobile device offers like internet-access, location-detection and mapping capabilities.

What if we tapped into the other powerful capabilities, could we volunteer on the actual device? This is exactly what micro-volunteerism is aiming to accomplish.

The Extraordinaries have some impressive stats, and they are just getting started. There are over 120 organizations now using their platform with 250 projects available and 32,000 registered micro-volunteers that have completed over 325,000 micro-tasks.

A good example is First Aid Corps, who have used the platform to map over 400 life-saving defibrillators across North America. Or Kaboom which now has over 350 play spaces mapped thanks to The Extraordinaries.

But the best example that demonstrates the true power of the platform was our Haiti earthquake response. On January 12th, 2010 a massive earthquake devastated Port-au-Prince, the capital city of Haiti. The world watched in horror. We had an emergency Extraordinaries team meeting to brainstorm ways to help the people of Haiti. We came up with a number of great ideas, but decided our platform could be best utilized for a missing person finder. With communications down, family members in North America were left with the uncertainty of knowing if their loved ones were still alive, however news agencies and aid organizations were streaming photos from the disaster. So our missing person finder would harness the power of the crowd to tag disaster photos (example boy, girl, man, women, alive, injured), then serve a missing person photo beside a related disaster photo allowing micro-volunteers to identify possible matches. 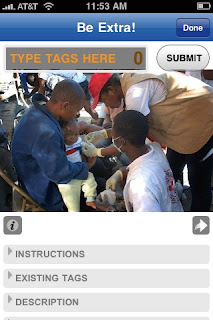 As a team, we always knew the power of the platform, but I believe it was the Haiti earthquake response where the general public understood that their micro-actions could make a difference. And we had an incredible response:

Insight: People want to help, you just need to give them a way.

Jacob Colker, the co-founder of the Extraordinaries had a great quote that captured why mobile is so critical to micro-volunteerism: “For me, the future of volunteering is finding ways to fit meaningful experiences into small amounts of time that are much more conducive to [people’s] hectic, busy lives, and if we’re going to reach them in small amounts of spare time, then the device that makes the most sense to do that is the smartphone.”

So the Extraordinaries have a platform that empowers nonprofits allowing the crowd to micro-volunteer via the mobile device.

On the other side of the coin, Samasource and CrowdFlower are using mobile devices to micro-volunteer in a very different way. Their iPhone application Give Work allows micro-volunteers to help support and provide work for refugees. 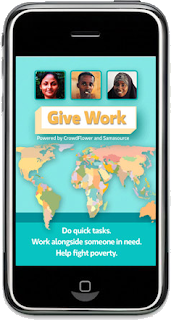 You download the app, and by tagging a video or tracing a road, you will generate money to help support training for a refugee completing similar micro-tasks, as well as provide quality assurance. Once a refugee reaches 75% accuracy, they move from training to paid work. Here’s a video explaining how it works.

Upon completing a micro-task, you earn points which equate to real world value for a refugee. For example, 5 points is one tomato, 10 points is one sms message, 100 points is half a fish, 1000 points is five minutes of airtime and 10,000 points is one large bag of flour. Give Work definitely is a great example of mobile volunteerism.

Ushahidi is another interesting group using mobiles to harness the wisdom of the crowd. Their crisis mapping platform was created following the post-election violence in Kenya. Their open source platform has been used to track outbreak of H1N1, monitor elections in Sudan and Mexico and most recently used to monitor the effects of the Gulf Oil Spill. 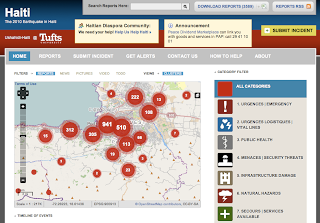 But the best example of using Ushahidi for micro-volunteering was the role it played in the Haiti earthquake response, in particular it’s partnership with Samasource and FrontlineSMS to establish Mission 4636. In the wake of the earthquake in Haiti, a free short code 4636 was established to meet the urgent needs of the Haitian people through SMS messaging. The problem; the majority of sms messages being sent from earthquake victims were in Haitian Creole or French which made it difficult for aid workers to understand. The solution; use FrontlineSMS to receive incoming messages, pass those messages through Samasource allowing micro-volunteers to translate, then publish the translated message to Ushahidi. Volunteers would then prioritize those translated messages so the information could be used by aid workers to find missing people or deliver aid. There was over 170 volunteers working in the situation room in Boston to help translate and prioritize the 80,000 sms messsages sent to 4636. Here’s a video explaining Ushahidi’s role in the earthquake response.

So mobiles are being used to aid traditional volunteerism, and micro-volunteering allows tasks to be completed on the actual device, but there are other interesting ways that people are using mobiles to indirectly volunteer for organizations.

Since you are checking-in on behalf of a nonprofit, you really are indirectly volunteering for that organization. Is this really a form of volunteerism? Some may argue no, but checkout the statistics on the impact of their application:

Question: An interesting idea but unfortunately the application is US-only, so where’s the Canadian equivalent?

Another example of indirect volunteerism worth noting is MobileRice, built upon the success of the highly addictive web-based game FreeRice which has collected over 77 billion grains of rice over the last two years. Download the MobileRice iPhone app and by testing your vocabulary skills you help donate rice to the World Hunger Programme. You normally wouldn’t consider playing this game volunteering, however since you are investing your time and the result is raising funds for that organization, you are really volunteering without even knowing. 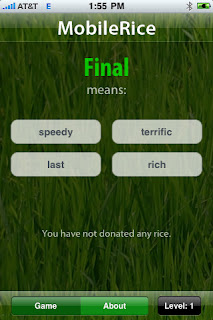 Question: Are there other ways we could allow people to indirectly volunteer?

Mobile devices are changing the way we work and live, and also the way we volunteer. They are being used to aid traditional volunteerism, enable micro-volunteering and allow unique ways to indirectly volunteer. But as the number and power of the mobile device increases, so does the potential for mobile volunteerism.

Big thank you to Hima Batavia for inviting me to speak at Net Change Week, it was an honor to be part of such an important conference.