Why The Extraordinaries Will Change The World

I first read about The Extraordinaries back in October, and after watching their short teaser video, I was convinced that these guys would change the world. I decided then that I needed to contribute to this incredible project that allows ‘anyone to utilize their downtime like during a commute to work, to volunteer and answer questions via their mobile phone’. So since January, one day a week I’ve been helping the Extraordinaries team develop their soon to be released iPhone application. 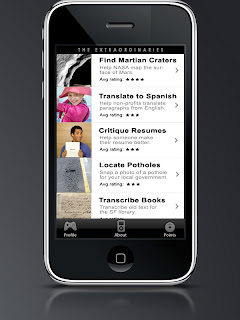 The application has come a long way over the past few months and being involved with the development, I sometimes forget how important the application will be. Today I was demoing it to a friend, who prior to this didn’t truly grasp the significance of volunteer crowdsourcing. After helping critique an under-resourced job seekers resume via the application, she had a spark of realization and said:


‘Oh my god, they are gonna divide and conquer to change the world!’

It was that moment that she got it, she totally understood the incredible potential of tapping into the wisdom of the crowd and capitalizing on the millions of spare moments we all have. Jacob Colker, the co-founder said it best during his WeMedia pitch ‘we have billions of hours of spare time, but it comes in brief moments’. The ability to split volunteer tasks into bite sized chunks, and connect people with the skills to those that need help, will truly change the future.

The recent PulseReview article How to Win in 2010 predicts the fate of politics will be decided by those who harness the power of mobile crowdsourcing.


‘The party that taps into this new group of mobile volunteers will gain a vast network of activists capable of accomplishing monumental tasks in the name of their cause. For those Republicans who were so outclassed on the web in 2008, this is a chance to catch up. For the Democrats, who Mr. Colker says have already expressed interest in mobile crowdsourcing, this is a chance to continue their dominance. The direction of the country may well depend on the outcome’ – PulseReview

The Extraordinaries have definitely been getting a lot of press lately, especially with their recent WeMedia win for best non-profit startup. And this is just the tip of the iceberg- there is plenty more exciting stuff coming down the pipe.

One thing is certain, mobile crowdsourcing is the future, and The Extraordinaries are destined to change the world!